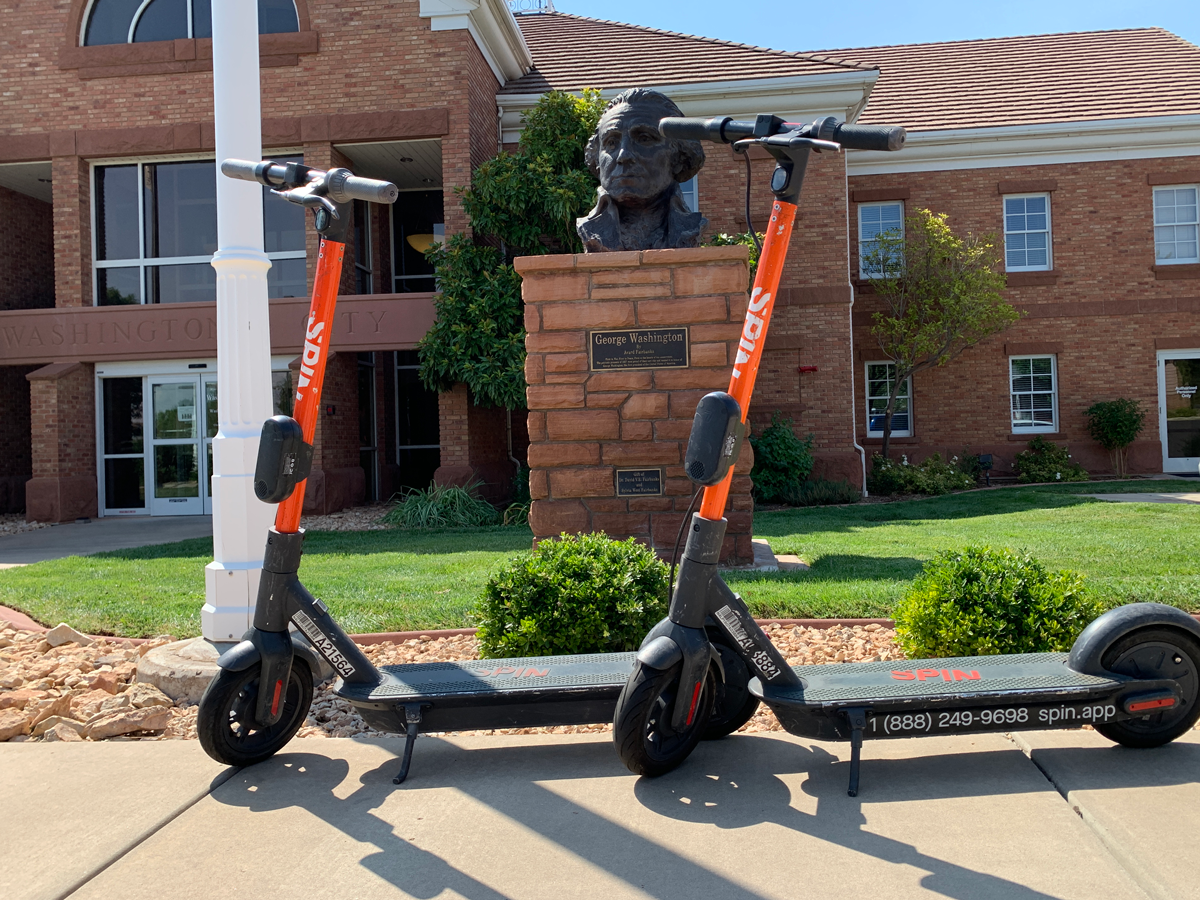 Washington City — Increased personal mobility will be expanded along Southern Utah’s streets and trails in the very near future. During Wednesday’s City Council meeting, the five-member Council approved with a ⅘ vote in favor of Spin e-scooters mobility service extension into Washington City.

The City and Spin agreed to an exclusive one-year contract, with three one-year renewals possible. Washington City’s one-year agreement coincides with St. George City’s existing agreement dates so that both communities evaluate agreement renewals at the same time. This allows southern Utah communities to work collaboratively and directly with one scooter provider to address concerns such as scooter placement balancing, maintenance, and safety. Washington City’s agreement also features a $0.15 per trip remittance back to the City to help offset any indirect costs the City may incur from the deal.

At the outset, Spin will provide 150 scooters with increases up to 300 based on demand. Spin will bring high-quality service and operations to Washington City through hiring an in-house Operations team. Hiring full-time W2 employees will ensure that scooters are properly maintained and charged at all times. Scooters will only be maintained at the warehouse within Washington City and will only be transported by Spin-owned vehicles. Residents may contact Spin’s local operations team via the Spin app, email, social media, or by calling/texting 1-888-249-9698 (the number listed on each Spin scooter).

“After careful consideration and comparison of popular scooter services operating in other Utah communities, we are happy to be partnering with Spin scooters,” said Washington City Councilman Ivie. Last year, St. George City approved an exclusive 2-year agreement with Spin scooters after the Micromobility Review Committee went through an extensive Request for Proposal (RFP) process with many great companies. “St. George and Washington City are close neighbors, so it makes sense for Washington City to choose Spin for continuity of scooter travel between the two communities.”

In addition to Spin app data showing an increasing demand for scooter services in Washington City, the City also received feedback from community members who support the service expansion. One resident wrote, “I am a big proponent of electric scooters because I think they effectively solve the last mile problem of transportation. Especially in the climate of southern Utah with limited snow and precipitation, a scooter paired with a bus line can be an effective way to avoid car ownership. Not that there is anything inherently wrong with car ownership, but for some people having a way to cut down on a car payment, fuel, insurance, and DMV fees is a big deal”.

Scooters are used by residents, college students, and visitors. In March 2019, Spin and St. George City agreed to a one-year contract to bring e-scooters to St. George for the first time. They became an instant hit. In one year, more than 124,000 scooter rides were taken, with an average of 21 minutes per trip. We expect to see similar usage in Washington City as the weather cools, scooter ridership picks up in the fall and spring. This means fewer car trips, especially for shorter distances.

“We’re thrilled to partner with the City of Washington as an exclusive scooter provider for at least the next year,” said Alex April, Senior Government Partnerships Manager at Spin. “Spin commits to working with city staff and local community stakeholders to ensure that Spin scooters increase transportation options while reducing congestion and pollution.”

Please use this link to view a map of proposed locations

Headquartered in San Francisco, Spin is one of the leading micromobility companies and a unit of Ford Mobility. Spin has been recognized for launching the first stationless mobility program in the United States and was instrumental in crafting the world’s first mobility permit system. As a trusted and reliable partner, Spin currently operates electric scooters in many cities and universities nationwide in the U.S. and Europe. Spin consists of a diverse team of experienced professionals from government and private sectors, and the transportation advocacy world, all of whom are committed to fulfilling the company’s mission--giving people the freedom to move and bringing people, communities and their urban environment closer together.  https://www.spin.app